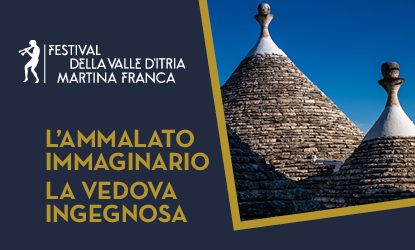 “L’Opera in masseria” – which brings eighteenth-century music theatre around historical masserie across the Valle d’Itria – is dedicated to the agile, juicy genre of intermezzo comico, with L’ammalato immaginario by Leonardo Vinci (Strongoli 1690 – Naples 1730), a peak of Neapolitan music school; and La vedova ingegnosa by Giuseppe Sellitti (Naples 1700 – 1777).

Composed to be performed in between the acts of Francesco Silvani’s Ernelinda (Naples, Teatro di San Bartolomeo, 1726), L’ammalato immaginario stages the stories of the typical hypochondriac à la Molière. Don Chilone is deceived into marrying Erighetta, a cunning widow whose sole objective is to move up the social scale and takes advantage of the elderly co-protagonist’s fears.

The intermezzo La vedova ingegnosa was composed by Giuseppe Sellitti with libretto by Tommaso Mariani, on the occasion of the staging of music drama Demofoonte, commissioned in 1735 for the birthday of Charles III Bourbon, and represented in Naples’ Teatro San Bartolomeo. It was probably the last intermezzo to see the lights of Neapolitan theatres.

The story follows protagonists Drusilla and Strabone: the former is determined to re-marry, and succeeds to break through the latter’s resistance. He is an improvised medical man, a coward with a strong sense of humour and lots of money. Success is guaranteed by theatrical expedients (including disguises) and paradoxical incidents created by puns and a whole variety of music forms and styles, expertly dosed for the necessities of the theatre.

From Monday to Friday: 10am – 1pm
info@festivaldellavalleditria.it

Fly to Bari and Brindisi from more than 100 destinations: