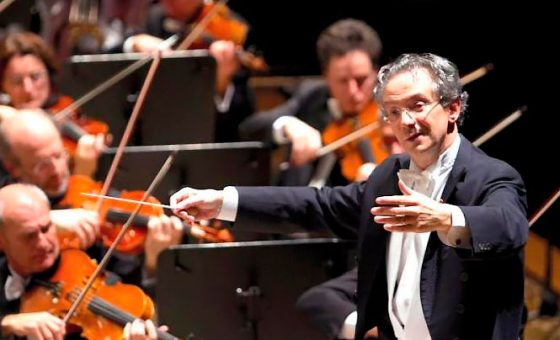 Born in Genoa in 1959, Fabio Luisi began learning the piano at the age of four, and graduated from the Conservatorio Niccolò Paganini in 1978. He followed this by studying orchestral conducting with Milan Horvat at the Conservatorio of Graz.

In the past he occupied various roles as musical director of the Staatskapelle Dresden and the Sächsischen Staatsoper (2007-2010), artistic director of Lipsia Mitteldeutscher Rundfunk (1999-2007), General Music Director of the Orchestre de la Suisse Romande (1997-2002), Principal Conductor of the Tonkünstler Orchester of Vienna (1995-2000) and artistic director of the Graz Symphony (1990-1996). A skilled interpreter of both opera and concerts, Fabio has an impressive record of collaborations with international orchestras and opera companies including Bayerischer Rundfunk, Wiener Philharmoniker, Chicago Symphony, Boston Symphony, Philadelphia Orchestra, San Francisco Symphony, Royal Concertgebouw, Orchestre de Paris, the London Philharmonic, NHK Symphony of Tokyo, the Monaco Philharmonic, Orchestra Santa Cecilia di Roma and the Mahler Chamber Orchestra.

He is a regular guest at the Staatsoper Vienna, the Bayerische Staatsoper, the Deutsche Oper and the Staatsoper Berlin. He impressed the New York Times with his “moving, perceptive and accomplished” conducting of three cycles of Robert Lepage’s visionary Ring, which was also nominated for Best Opera Recording of 2012 by Deutsche Grammophon, and a Grammy Award for his conducting of the final two works of the four-part series in 2013.

In addition to repertoire recordings, his vast discography includes rare works such as  Jérusalem, Alzira and Aroldo by Verdi and La locandiera by Salieri, a recording of Bellini’s  I Capuleti e i Montecchi for Deutsche Grammophon and the symphony repertoires of Honegger, Respighi and Liszt. He has recorded all the symphonies and the oratorio  Das Buch mit sieben Siegeln by the neglected Austrian composer Franz Schmidt and several works by Richard Strauss for Sony Classical; he also received an award for Bruckner’s Ninth Symphony with the Staatskapelle Dresden.